©2011-2012 The Theater Project at the Majestic Theater, Inc. All rights reserved.

Blood Brothers by Willy Russell was first produced in 1983 and still runs in London in 2012, making this extraordinary show one of the longest-running musical productions in history. The story of the Johnstone twins, separated at birth by the circumstances of class and economics, was a huge hit here at the Majestic in our second season and it has been one of the shows we've often been asked to bring back. For this revival of Blood Brothers, Majestic favorites Christine St. Amant Greene, Ben Ashley, and Doug Major reprise their roles. If you haven't seen Blood Brothers, you won't want to miss it. And, if you saw it before, you'll definitely want to experience it again!

Barefoot in the Park is Neil Simon's longest running and most endearing Broadway comedy. The play focuses on newlyweds Paul and Corie Bratter, as they attempt to adjust to married life. He's a buttoned-down lawyer who's wound just a little too tightly. She's an effervescent free spirit who refuses to let anything disturb their romantic bliss - certainly not their first apartment, a tiny five-floor walkup with a hole in the skylight, or the eccentric upstairs neighbor who has to go through their apartment to get to his. Barefoot in the Park will be a charming, character-driven comic delight!

The Cabbage Patch by Canadian playwright Daniel Lillford is described as a "black comedy and mystery" and in a forward to the script the author says, "I am drawn to the soldiers' stories because of my grandfathers. Through their stories, and through others, comes this play. It's not a big play. It is merely like that poppy I buy each year, one small mark of respect and remembrance." The play focuses on Arthur, an ex-Canadian Army Captain who now spends his time as an inventor and gardener; his British-born wife, May; and Roy, the town drunk, who served with Arthur in Korea; and Arthur's sister-in-law, Jean, who has gone missing. The Cabbage Patch is a funny, intriguing, and heartfelt new play.

Skin Deep by Jon Lonoff has been described as a "quick-witted and intelligent voyage into the not-so-tranquil seas of middle-aged love and dating." The large, loveable, and lonely-hearted Maureen Mulligan is set up for a blind date by her cosmopolitan sister, Sheila, with the clumsy-of-manner and blunt-spoken Joe Spinelli. Maureen relies on a sharp wit and wisecracks to cover her feelings, and Joe can't seem to contain his awkward eagerness. There is so much hidden heartache beneath the humor of Skin Deep that you'll find yourself cheering when Joe and Maureen make it to the final scene's ending kiss!

The late Harry Chapin, who died tragically in an automobile accident on the Long Island Expressway in 1981, more than any other popular songwriter, was a storyteller. His music celebrated the extraordinary lives of ordinary people. Sometimes funny, and sometimes sad, Harry Chapin songs like "Taxi", "Cat's in the Cradle", "Mr. Tanner", and "A Better Place To Be", always remind us of the emotions we all share. They are a unique blend of folk, pop, jazz, and rock music that create both touching - and sometimes cutting - stories of love and life. Lies & Legends will leap from the stage and straight into your heart. 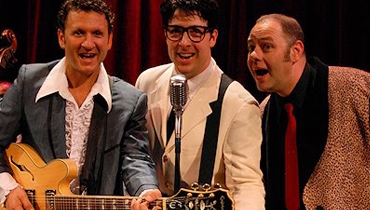